Paisley patterns have been a popular interior design motif for decades. Prior to their use in home decor, paisley was a much-loved motif in the fashion world, starting with its introduction to Western Europe several centuries ago from Central and Southeast Asia.

The paisley pattern is a droplet-shaped motif that is believed to have originated in either Persia (modern-day Iran) or India. It is kidney-shaped, and somewhat resembles a large comma or a twisted teardrop. No matter how you describe this pattern, there is no disputing its modern name, which is derived from the town of Paisley in central Scotland where popular shawls with this motif were produced during the 19th century.

Scholars debate whether the pattern originated in India or in Persia. Both countries have an origin name for the motif. In Sanskrit the design is known as mankolam. However, it is most widely known as a popular pattern in Persia during the Safavid Dynasty (from 1501-1736), when it was used to decorate royal crowns and court garments, as well as textiles used widely by the general population.

Whatever the origins of paisley, today this pattern is still widely popular in Iran and other South and Central Asian countries. Many of these countries not only adorn textiles with this motif, they also incorporate it into paintings, jewelry, curtains, tablecloths, quilts, and pottery.

Gorgeous shawls with the paisley pattern have been woven in Kashmir for hundreds of years. When Western European nations began to explore the areas of Central and Southeast Asia, they brought back with them some of these never-before-seen shawls as presents.

The shawls and the pattern eventually became so popular that manufacturers in Europe created weaving and printing techniques to create their own versions. Ultimately manufacturers in France, England and Holland began to mass produce the patterns by the late part of the century.

By the 19th century the production of the motif had spread to the town of Paisley in Scotland, where weavers produced fine wool and silk shawls fashioned after those brought back from Kashmir.

Today, paisley has continued in popularity in both fashion and home design. Designers have translated the pattern to fit in both modern and traditional interiors, interpreting the design with bright bold colors. Many also continue to maintain classic versions with rich tones and textures.

Where to Find Paisley Patterns for the Home

There are many different ways to incorporate paisley patterns into your home. If you want just a little bit of this exotic motif, consider pillows or a throw. Or you can incorporate it in a less traditional way with large, blown-up versions of paisley on dinnerware and bedding.

Furniture makers continue to use classic versions of paisley on upholstered pieces. When paired with a more neutral room, this beautiful pattern can make a gorgeous statement.

A fair warning to those who love pattern: Paisley does not go well with other florals. If you are interested in mixing and matching motifs consider checks or other geometric styles. Better yet, stick to paisley as your key theme and design the rest of your room in muted stripes or play with textures.

Just a couple of throw pillows in a paisley pattern can add a lot of fun and depth to your room. Check out the following pillows for some inspiration:

Incorporate some stunning contemporary dinnerware into your table setting. Any of these sets will look gorgeous with a plain white tablecloth as a background.

Add some richness to your bedroom with paisley bedding. Because there is so much of this motif to go around, keep the rest of your room simple and clean. 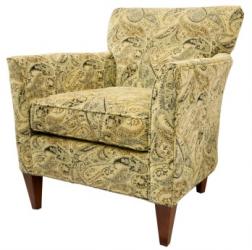 Pair these paisley-upholstered furnishings with simple accessories and a muted color scheme.