Modern design encompasses a lot of different incarnations, which can make it difficult to define. In its simplest terms, modern interior design refers to the reflection of the modern art movement on the interiors of the home. There are several central characteristics and design themes seen throughout modern design, however, that could be described in part as the definition.

Modernism was a rejection of the ornate flourishes of other design styles, such as Gothic, Renaissance and Victorian styles of design. Therefore, many of the different modern designs have several common components of which the design themes have become associated with modern design.

Modern design was meant to be the antithesis of the previous design styles which used heavy textures, carvings and wood tones throughout the home. Therefore, most components of modern design, from the furniture to the shape of the rooms, includes clean, straight lines with no additional detail. This differs slightly from contemporary design, which uses curves and sweeping lines; modern design's lines are crisper, sharper and very spare.

That said, there are several different design types that fall into this category, particularly for furnishings, such as:

Chrome and stainless steel make up a big part of modern design. Doing away with traditional metal details (like wrought iron) opens up the door for clean, polished metals to be used in their place.

It's not uncommon to see chrome or stainless steel as part of the furniture, such as table legs or exposed portions of a chair's frame. Chrome is used extensively throughout the home seen in faucets, doorknobs, cabinet handles, lamps and railings. Polished chrome has a very high shine and a slightly blue undertone that makes it appear very cold, which helped it fit in well with modern design's mission for moving away with older, more "lived in" styles.

Minimalist design can be thought of as spare, but in reality it takes a lot of planning to ensure that what's included in the home is absolutely necessary. Minimalist homes are often far more comfortable than they appear, due to the way they are streamlined for efficiency.

A lack of clutter ties into the minimalist approach to modern design. While clutter can mean many things to different people, in regards to modern design it refers primarily to accessories. This means no knick-knacks, vases, pottery, collections or excessive use of throw pillows, rugs or blankets. Any necessary items, including books, electronics and keepsakes are kept either out of sight inside a cabinet or closet, or are built into the home with built in shelves or hidden storage beneath benches or window seats.

The majority of homes decorated in modern styles use neutral colors and shades of black and white exclusively throughout the home. Bold, often primary colors are used as accents to help break up the neutrals and provide focal points. These colors are often introduced sparingly, and rarely used as an all-over wall color. Examples of how to use bold colors in modern design may include:

Modern design is part of the larger movement of modernism. Modernism is usually dated back to around the end of the 19th century, although there are examples of modernist thought before that time.

Essentially, modernism is associated with modern thinking. The modernists were keen to shake off the intellectual, creative and cultural norms of the Enlightenment and to push the boundaries both culturally and creatively. This included a movement away from organized religion and the idea of a single, omnipotent god. The modernists were concerned with developing new norms and mores that were more suited to a world that had experienced great change since the Industrial Revolution. The words of Ezra Pound became one of the mantras for modernism: Make It New!

Modernism started as an intellectual movement, but soon spilled over into all parts of life, from the political to the creative. Literature, art, music and design - both architectural and interior design - all fell under the influence of modernism. Some of the subgenres of art and design that fall under the heading of modernism include:

There is no concrete end date for modernism, though most people agree that Post-Modernism began in the late 1970s/early 1980s (though the date is earlier for music). Post-modernism is the subject of much debate amongst scholars, with some believing it is defined as conceptualism and intermedia creations, while others believe modernism has never really ended or given way to post-modernism.

Modern interior design can be thought of as a spectrum, rather than as a single, defining style. Modern design encompasses both the bright and bold designs of a store like Ikea and ultra-minimalist furniture at the same time. On one end of the spectrum, the spirit behind modern design is to reject the notion of designing for mass appeal in favor of starker and more minimalist designs, while on the other end of the spectrum you will find designs inspired by the bold colors used in abstract art. 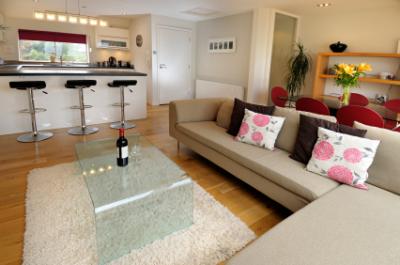 The open floor plan in this house joins the kitchen and living room in one space. A counter provides a visual definition between the two areas, while providing seating and conversation. The design also boasts clean lines, chrome accents and a single accent color - red - repeated through the space. 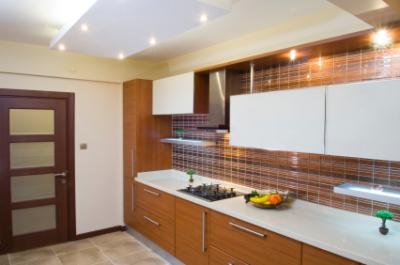 Modern kitchen design incorporates many of the same themes and ideas found in modern interior design. This kitchen features clean lines in the cabinets and counters with no decorative edges or raised panels. The sharp lines are repeated throughout the backsplash, while a single, monochromatic color is shown throughout the kitchen. 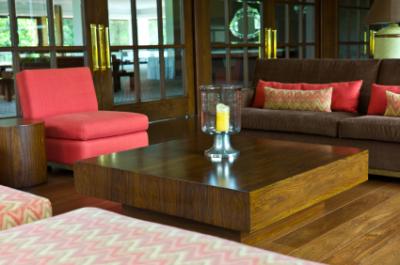 While this living room is darker than most modern spaces, it uses several central themes of modern design. The clean lines in the furniture are repeated throughout the space, while a single bold color is used to draw the eye and make a statement in the area. 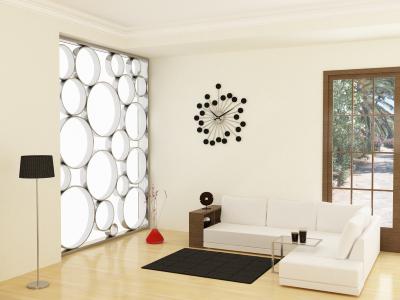 This minimalist living room uses furnishings very sparingly, keeping the color scheme very simple and a single repeating shape - circles - as the only design element. A small pop of red on the floor breaks up the black and white. 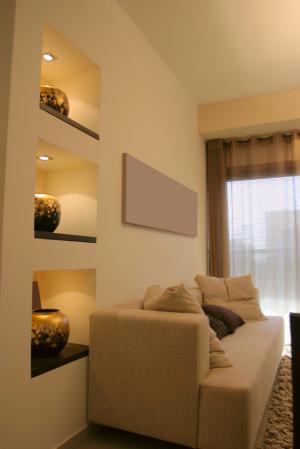 This living room illustrates how it's possible to showcase personal items like pottery or collectibles, without cluttering up the room. These built-in shelves are spot lit from within to show off their contents, while the lines of the shelves mimic the lines seen elsewhere in the room.

Modern design may not have a single definition, but it was and is a movement that characterized a large number of design styles. Inject a little modern design into your home to truly get a sense of what this design style can be.

2
Comments
© 2006-2020 LoveToKnow, Corp., except where otherwise noted. All Rights Reserved.
What Is the Definition of Modern Design?