Window film provides a handful of both decorative and functional uses around the home. Knowing the options can help you decide which type will work best for you and following detailed instructions for installation ensures they will look great from day one.

Residential window film comes in two main types: adhesive and non-adhesive clings which adhere to the glass through static cling. Each type has pros and cons worth considering when choosing:

The following subcategories of window film come in both cling and adhesive varieties except for security film which always has an adhesive side:

When Not to Apply Window Film

According to Home Depot and the Natural Handyman, there are certain situations to avoid when applying window film. Do not apply window film:

How to Measure for Window Film 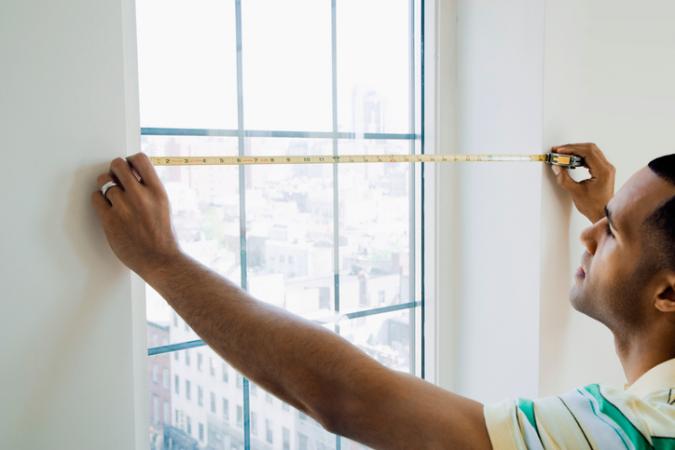 Once you've decided what type of window film to install and where, it's time to measure your windows. The measurement should only include the inside surface of the glass and not any part of the frame.

Most window film is sold by the foot. A window measuring 21 inches by 42 inches would require a window film at least 2 feet in width and 4 feet long. When doing a rough cut to size for the window, be sure to include the extra 2 inches on the width and height, so all four sides end up with 1 inch of overlap. Once the film is in place, it can then be trimmed for an exact fit inside the window frame.

Half Circle or Arched Window

If you have a window in the shape of a half circle or arch, follow these instructions:

If the window is oval shaped:

If the window is a circle:

Refer to this measuring guide for other odd window shapes or contact the window film supplier for help.

Make A Template for Rough Cuts

If you want to avoid the difficulty of trimming window film on a curve, look for a window film supplier that offers a "Trim to Size Service," such as Wallpaper for Windows. The film will arrive already sized for a perfect fit within the frame, eliminating the need to cut or trim the film at all. This service does cost extra and leaves absolutely no room for mistakes.

How to Install Window Film

The following installation instructions apply to both adhesive and non-adhesive window film, as they install mostly the same way. However, you need to use more caution when separating the release liner from adhesive film, to ensure it doesn't stick to itself or anything else before you place it on the glass.

Depending on where you buy your window film, some retailers offer complete installation kits that include all the tools needed for installation. Otherwise, you'll need the following items to install window film:

Add half a teaspoon of baby shampoo to the spray bottle. Fill the rest of the way with distilled water. 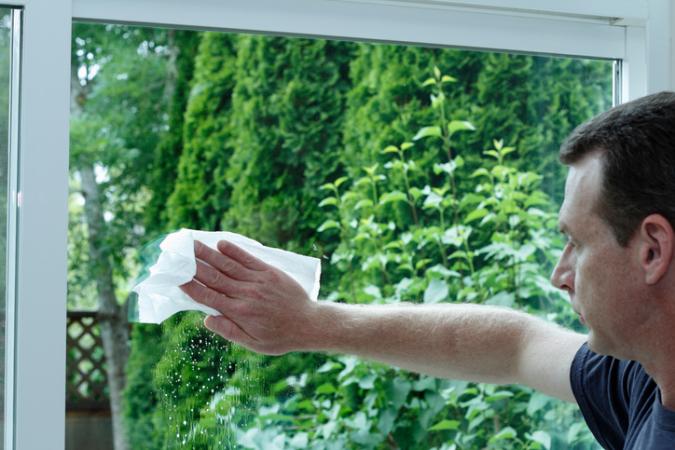 Do not use typical household glass cleaners that contain ammonia to clean the window. Ammonia will break down the adhesives and the acrylic, scratch resistant layer of window film, causing it to fail. Instead, do this:

Measure and cut the window film so it is 1 inch larger than the window's surface on each side. Use a straight edge to ensure your cuts are straight, especially if the film has a decorative pattern.

Tip: Window film can dull the blade of a utility knife and a dull blade can tear the film. Change to a new blade each time 10 feet of window film is cut.

Spray a generous amount of the cleaning solution over the entire surface of the window. Make sure there are no dry spots and if the solution starts to dry before applying the film, spray more solution on first.

Removing the liner from the back or adhesive side (the side that will face the window) can be tricky, so commission the help of a friend to hold the film for you if possible or lay it out on a flat surface. Be careful not to crease the liner.

Note: If using non-adhesive window film, it's not necessary to spray the side that will face the window, as long as the surface of the window is thoroughly wet.

Tip: If you have trouble separating the liner from the film, try this technique. Attach two 4 inch long pieces of transparent tape to the front and back corner of the film. Apply about an inch of the tape to the surface of the film and allow the rest to hang off the pointed end of the corner. Press the two pieces of tape together then quickly pull them apart to begin separating the clear liner from the adhesive side of the film.

Ensure that both the adhesive side of the window film and the window's surface are thoroughly wet with cleaning solution, as this allows you to move the film around and position it in place before it begins to stick to the window. Holding the film at the corners, press the wet side of the film to the window, starting at the top and smoothing it out as you go down. Position the film so there is an equal amount of overlap on all four sides. 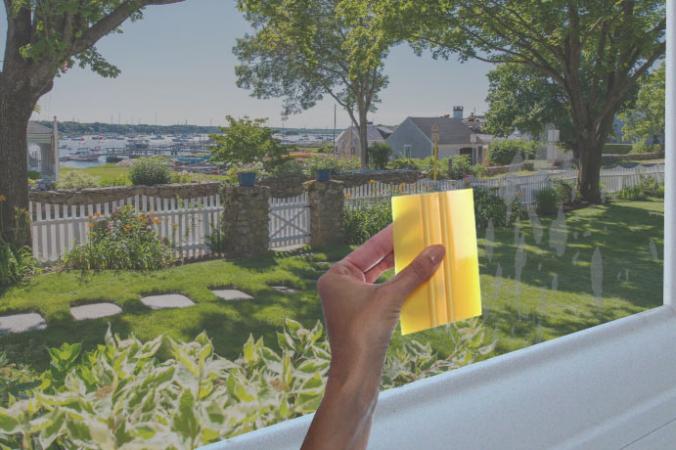 Lubricate the outer surface of the window film now facing you by spraying a generous amount of cleaning solution over the entire surface. Then, follow these simple steps:

Using a ruler and a utility knife, trim the excess window film around each side of the window.

Tip: It may take several days for the window film to dry completely and for the adhesive to cure. It may appear milky or foggy for up to a week. Do not attempt to move or clean the window film during this time.

It is recommended to wait 30 days before cleaning adhesive window film to ensure the adhesive has cured completely. Use an ammonia-free household cleaner to clean windows treated with any type of window film and avoid abrasive cleaners or rough, abrasive surfaces (even coarse paper towels) that can scratch the surface of window film.

Non-adhesive static cling window film is very simple to remove. Starting in a corner, use your fingernail to get under the film and then slowly peel it away from the window. It must be stored on the original backing paper or liner that came with it if you plan to reuse it.

To remove leftover adhesive, spray the glass with soapy water and carefully scrape it away with the scraping tool. For tough residues, you can also use a spray adhesive remover.

Whether it's a decorative accent, a functional protectant or both, window film is a relatively inexpensive way to upgrade the architectural features of your home without needing to hire professional help. Select the right one and install it perfectly yourself.

0
Comments
© 2006-2020 LoveToKnow, Corp., except where otherwise noted. All Rights Reserved.
Resources, Advice & Tips for Covid-19
Read More
How to Use Window Film