Plantation homes were built during the Antebellum (pre-Civil War) era (1830 - 1860) and were prominent in the Southern states of America. The architectural features of French Revival and Greek Revival styles were prominent. Louisiana plantation homes often incorporated Spanish architectural features of ironwork for stairway and balcony railings. A handful of homes used Italianate and Gothic Revival ornate features.

There were two main features found in most plantation homes: a large entrance hall and a parlor or drawing room. 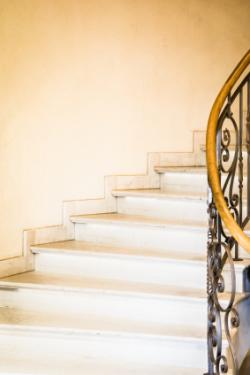 The entrance hall was very important during this era since it was the reception area where guests were greeted. It also was used to make a statement of grandeur and wealth. More importantly, the entrance hall was part of the natural ventilation design of plantation homes since it helped to disperse trapped hot air into the next level of the home.

Typically, a sweeping curved staircase leading to the next level was located with the entrance hall. This was usually placed opposite the main double door entrance for visual effect. The staircase afford quite a bit of pomp and ceremony for various events held in the home. The owners could make grand entrances to the gatherings and parties they held or a bride could be guided down the sweeping staircase on the arm of her father for a truly elegant wedding procession.

If you're building a plantation home, then pay close attention to the entrance. Some of the elements you want to include in the foyer area:

Create a Parlor or a Drawing Room 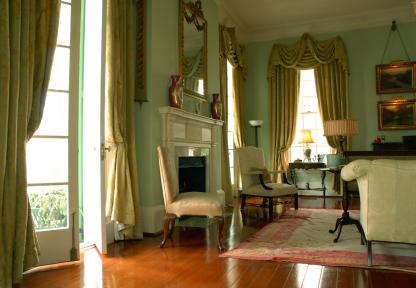 The parlor was a vital part of the plantation home and was located near the front door. This allowed privacy and comfort for receiving guests. In large plantation homes, there were two parlors. One was larger and called a drawing room. This is where formal entertaining occurred. It was also where the men retired after a formal dinner to smoke cigars and drink cognac.

The parlor was a smaller room and used by the family. It was where day visitors were received and the women retired after a formal dinner. In the parlor, they would sip hot tea or coffee and catch up on the latest gossip.

You can transform a room located in the front part of your home into a plantation parlor by including the following elements: 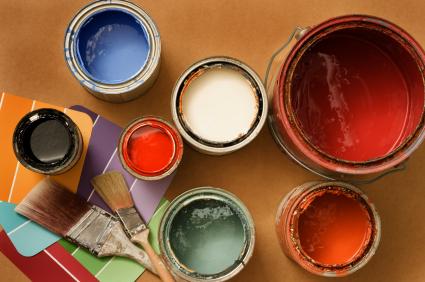 The exterior of plantation homes was typically stucco that was white-washed, however, there were many homes made of brick. Because plantation owners were wealthy, their homes were quite large and were referred to as mansions. 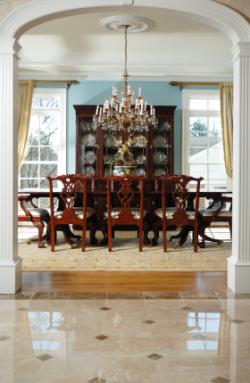 Many of the master cabinet makers of the 18th century remained popular throughout the era of plantations in the South and are still the deciding styles of classical furniture. Mahogany was a highly cherished wood used in furniture making.

Some of the popular furniture styles used in plantation homes included:

Rice Bed a Must Have 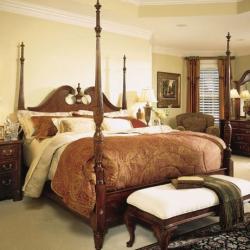 You can't design a plantation home without having at least one Rice Bed. This design attributed to South Carolina is a tall four poster bed minus a canopy.

The posts are carved from cherry or mahogany wood with ornate carvings that depict either rice or tobacco. Similar styles add ambiance to the bedroom and help complete the home's design.

Damask was always the preferred fabric for upholstery, although others such as velvet, English Chintz and French tapestries were used. During the summer months, slipcovers made of white cotton duck canvas were fitted over the furniture to protect it from sweat and oil. Thick wool rugs were often replaced with cool sisal rugs and heavy draperies were replaced with breezy sheers.

Silk damask was the most popular fabric used for draperies and curtains. Large and ornately carved cornices were used and often gilded with gold and served as a visual status symbol. Another popular style was valances comprised of luxurious folds fabric to top draperies or curtains.

An example of drapery treatment might be a red damask drapery with a lace overlay that was lined in either a yellow or green silk for a striking visual effect.

Wide wood shutters were used for privacy and cross-ventilation with the draperies open. These are referred to as "plantation shutters" and were great to block the afternoon summer sun while allowing ventilation within rooms.

Hardwood floors were the most common types of floors and were covered with expensive wool rugs, including thick hand-carved Aubusson rugs.

Many entrance halls featured prized Italian marble floors that continued up the winding staircase. Wooden inlay patterns along the perimeters of wood floors could be found in dining rooms, parlors and libraries, as well as forms of parquetry.

Two popular choices for hardwood were oak and a lesser choice, heart of pine, since both pine and oak trees were abundant on plantation land and easily harvested.

The finishing touches for your plantation home design should include various art and sculptures, both small and large. Antebellum dwellers loved the master artists and those who could afford the expense prided themselves in owning several original pieces.

In a modern design, you could display antique finds such as grass or pine needle woven baskets, china, silver and cut-glass bowls, trays, pitchers. Embroidered dollies graced side tables and buffets and needlepoint pillows were prized possessions that demonstrated the talents and abilities of the lady of the house.